“It allows us to stay the course as we continue to transform the center into the multi-user spaceport of the future,” said KSC Director Bob Cabana.

Cabana said just under $2.1 billion from various programs would flow through KSC, a tad more than in the current budget year, which ends Sept. 30.

Most of the nearly $1.2 billion supporting human spaceflight activity reflects the agency’s $848 million request for the Commercial Crew Program, which is led from KSC and aims to launch astronauts from the Space Coast on private rockets and spacecraft by 2017.

The program would receive an additional $250 million from President Obama’s Opportunity, Growth and Security Initiative, a $56 billion proposal that depends on tax changes and other spending cuts.

How much funding Congress approves for Commercial Crew will be important in determining how many companies ultimately fly astronauts to the International Space Station and establish local operations.

NASA plans to award one or more contracts this summer, and says funding to maintain competition is important to keep costs down and ensure safe systems.

“Our execution of that selection will be highly dependent on the amount of money that we get in 2015,” said NASA Administrator Charlie F. Bolden Jr. “It will enable us to buy down the risk on assuring that we have a 2017 launch, and it will help us to ensure that we maintain competition in bringing about an American capability to launch our astronauts to space.”

The rest of the exploration-related funding KSC could see in 2015, plus some of the $96 million earmarked for facility construction, would help prepare the Vehicle Assembly Building, launch pad 39B and other infrastructure for a late 2017 inaugural launch of the giant Space Launch System rocket with an uncrewed Orion capsule.

The Orion is targeting a first test flight in space this fall, to be launched without a crew by a Delta IV Heavy rocket from Cape Canaveral Air Force Station.

The rocket’s first two of three boosters arrived at the Cape this week, and Cabana said the spacecraft should roll out of its high bay for final processing in May.

The first crewed Orion flight is targeted for 2021, to a destination still to be determined.

An essentially flat budget in 2015 would mean KSC’s work force would stay about the same, too.

Cabana doesn’t expect that to change much in the near-term, but hopes increased operations by commercial space companies will spur job growth.

“As the civil sector grows at KSC, that’s where I’m hoping that more jobs come into the area,” he said. “Not necessarily through NASA-funded work, but through actually transforming KSC into a government-commercial spaceport where we have civil operations also.”

The agency had hoped to wrap up deals last month to lease launch pad 39A to SpaceX and turn over operation of the former shuttle runway to Space Florida.

In 2015 the center’s Launch Services Program would continue to buy rockets to fly from the Cape and other locations. 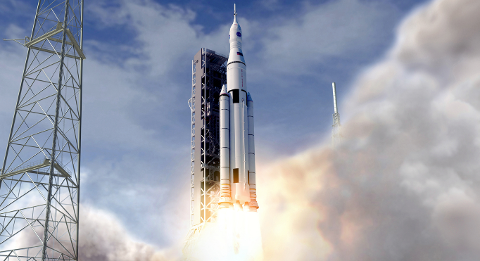