Organizers of the Melbourne Air and Space Show, which in the past has been a beachside attraction, on Tuesday morning will pitch to local officials the idea of having it based at Melbourne International Airport.

The airport staff is cautiously studying the issue but haven’t formally made a recommendation one way or the other on giving show organizers the OK to proceed.

The staff have noted some logistical questions have arisen regarding the October show — mainly if hosting the show would require the blessing of the two major airlines that fly into Melbourne International.

In the past the show has been held in Cocoa Beach and last year it was held at Paradise Beach Park – Melbourne beachside. 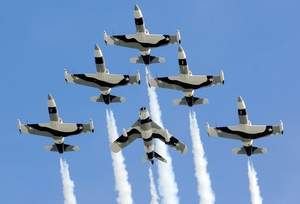