Once targeted for September or October, the mission called Exploration Flight Test-1, or EFT-1, is now shooting for an early December launch atop a Delta IV Heavy rocket from Cape Canaveral Air Force Station.

Orion will circle Earth twice, climbing 3,600 miles above the surface to set up a fiery plunge through the atmosphere at speeds close to those Apollo crews experienced when returning from the moon. Splashdown will follow in the Pacific.

“I assure you that Orion is going to be ready to go on time,” said Cabana. “And as soon as we get our opportunity, we’re going to be launching that vehicle on its first flight test, and that is pretty darn amazing.”

NASA could not immediately confirm the mission’s cost.

NASA officials said that the slip allowed an Air Force satellite launch to move ahead of the Orion launch. It was not clear if Orion and the rocket otherwise would have been ready on time.

What does not change are plans for a December 2017 launch of another Orion on the maiden flight of the agency’s giant Space Launch System rocket, or SLS, said Robert Lightfoot, associate administrator at NASA headquarters.

Two of the three core boosters that will get Orion off the ground — each 134 feet long and producing three-quarters of a million pounds of thrust — arrived recently from Alabama. A third booster is expected with the rocket’s upper stage next month.

“Essentially, this is the biggest rocket we’ve got” without flying on the SLS, Cabana said.

Lightfoot described the mission as part of a stepping stone approach toward developing an exploration system that could take people to Mars, which NASA has said might be possible in the 2030s. By the mid-2020s, the agency hopes to send astronauts to an asteroid.

The version of Orion scheduled to fly this year has no life support systems that would enable people to fly.

The test will attempt to show the capsule’s heat shield is strong enough, and require separation of a protective fairing and launch abort tower. It will test about half the capsule’s planned electronic systems, plus parachutes and recovery systems.

“This test will be important for us,” said Lightfoot. If any problems are found, he said, there will be time to correct them before Orion’s final design is set next year.

Current schedules call for the first Orion to leave its high bay in May to be joined to the launch abort system and readied for placement atop the rocket.

“It’s on schedule,” said Cabana. “Lockheed Martin is going to deliver that (Orion) vehicle on schedule.”

The schedule has more time now that an Air Force mission will launch before Orion, also on a Delta IV rocket. 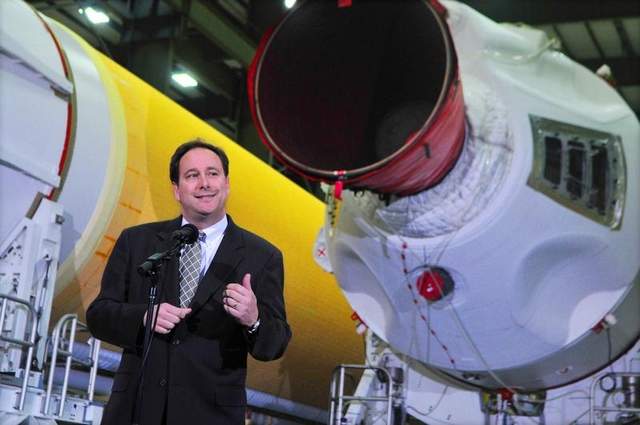