Meet Red, the Colombian Red Tail Boa. Red is one of the many pets that can be found at Airboat Rides at Midway. 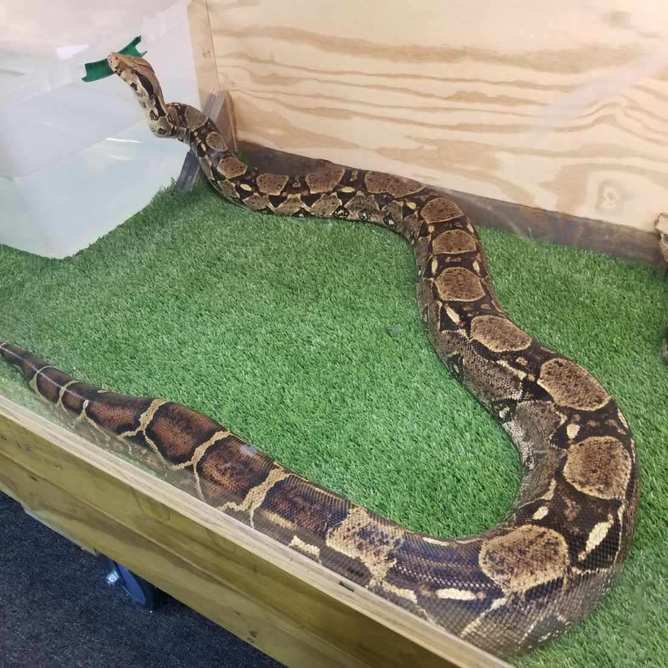 Red, is a non-venomous, heavy-bodied snake. He is twenty years old and has been a pet-resident of Airboat Rides at Midway for around 6 years.

Red Tail Boas are the most common choice for a pet snake. The species themselves are identifiable by a red patterned coloration at the end of their tail. While boas are frequently found in Central and South America, Red Tail Boas are usually bred and kept in captivity.

Red came to Airboat Rides at Midway from a pet shop, but he was born in South America.

Full-grown boas can grow up to eight to ten feet in length and can weigh up to fifty pounds full grown. Red has measured to be around eight feet long and weighs forty pounds.

Red Tail Boas are non-venomous snakes, but they do have teeth; therefore, they are still able to bite. Red’s teeth are bent backward and resemble fishhooks.

At home, Red is roommates with Baby, the Burmese Python. Red loves to hang out in the “penthouse” portion of his shared habitat. While he enjoys the view, he also likes to climb the tree branch in his room, where he lounges around to sunbathe. 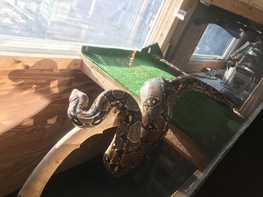 Red gets fed every ten to fourteen days. Like most of his species, he likes to feed on appropriately sized rodents, like large juicy live rats.

Next time you take an Airboat Tour, be sure to stop in afterward and visit Red and the many other pets, that can only be observed at Airboat Rides at Midway.