Lawndale is a historic home in Rockledge, Florida, built by Hiram Smith Williams. The house is a registered on the National Register of Historic Places and is a contributing structure to the Rockledge Drive Historic District. The house was built in three stanzas - the first beginning in 1874 upon his arrival to the area, and the second stanza completed in early 1888, and a final remodeling in late 1891, when the house reached its final form. Williams lived here with his wife Cornelia, his son - Sydney, and daughter, Myra.

A carriage builder by trade, Williams relocated to Florida from Alabama to find new prospects during the economic turmoil of the Reconstruction period following the Civil War. He found success not in the building of conveyances, but in agriculture. His 'Lawndale' label citrus, which he grew on groves that eventually amassed to hundreds of acres around his home, helped establish central Brevard county as a center of fruitpacking. Williams also spent much of his time promoting and leading the community, becoming the first postmaster for Rockledge, serving as County Treasurer and in the mid-1880s, serving as a State Senator. He established the Brevard Telephone Company in his later life - the first telephone service within Brevard County.

Williams was also a proponent of education, building as part of his home a school-room - one of the earliest purpose-built spaces devoted for education in the county. This schoolroom was not only used for the education of the Williams children, but also of multiple children in the first days of the Rockledge community. Williams and his children spoke multiple languages - and his daughter Myra, was a graduate of Rollins College in 1898.

The Williams family lived in the house continuously until Brevard County purchased the house as part of the Beach and Riverfront Purchase initiative in 1989. The house has been restored over the course of twenty years and js now open to the public the first Saturday of every month 10 AM to 3PM 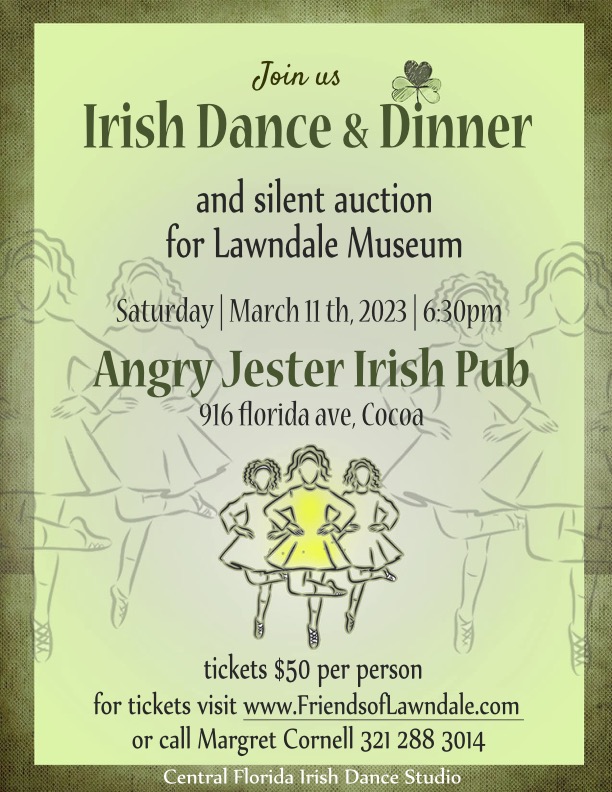 See a performance by the Central Florida Irish Dance Studio. Enjoy an Irish meal and participate in the excitement of the Silent Auction while supporting the Lawndale Museum. Cash bar available.