At KarmaToursFlorida we believe that the problems we face today are the result of the decisions we made yesterday.   Hello my name is Bruce Van Horn, I am passionate about American history and I will be your tour guide today.   We will take a journey back in time when  Florida was an exotic and dangerous destination.

Florida is rich in nature and history.   The colonial powers exploited resources and indigenous populations in their quest for power.   Our tours focus on the history of The African Americans and Native Americans who were the indigenous peoples of Florida.

The African presence in Florida extends as far back as the 1500’s with Hernando DeSoto’s explorations and settlement.   In the early 1700’s many African slaves fled from other southern states to escape slavery into the swamps of Florida.   In the 1800's Florida would become a confederate state and slavery supported the agrarian economy.

After the civil war right up threw the civil rights era of the 1960’s African Americans were persecuted and disenfranchised,  as a result, many fled to northern cities during the great migration. 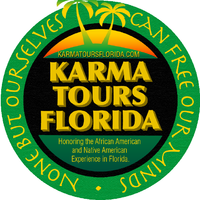